The control system is a vital part of the project, with the potential to provide innovation as well as a good understanding of engineering design techniques.  The problem we aim to satisfy is keeping the boat running on the foils

A foil boat generally requires some means to keep the boat from pitching and heeling excessively when lifting. If the foils, mounted on the tip floats, have a variable angle of incidence, they may be adjusted to provide variable lift, independently.  This could be by manual control, requiring a skilled ‘pilot’, or by an automatic system, which maintains each foil at a constant depth below the water surface.

Hydrofoils are used on watercraft to provide lift, and stability. Generally, foils may be fixed or capable of varying their angle of incidence. Fixed foils may be angled to be part submerged, and part above the water surface, so that as they rise, the submerged area of foil decreases, and equilibrium will be achieved. But foils, which break the surface causing wave drag and suffer from ventilation, which is the pulling air down to the upper surface of the foil due to decreased pressure. Thus, fully submerged foils, with some means to prevent them reaching the surface, are potentially more efficient.

With a simple, uncontrolled foil, the up-thrust generated increases as a function of the square of the velocity of the foil, causing the craft to rise out of the water as the boat accelerates.

Although this is the desired effect, the craft needs to remain in flying mode over a range of velocities. In order to do this, the lift on the foil must remain constant and equal to the weight of the craft over a specified range, adjusting accordingly to the craft velocity to keep the craft at a stable and level flying height.

In both cases, it can be seen that the control of the foils must be in response to the flying height of the given datum (the lowest point of the hull) above the water’s surface. To low and the craft will under-perform, too high, and the foils will reach the free surface, aerate, and lose all lift, causing the craft to crash dangerously into the free surface.

Mathematical models generated for our hydrofoil craft show that with the varying attitude and direction of the sail and motion, the load distribution between the three foils varies significantly. In order to keep the craft performing as designed, in a near level flying mode, it is important that the system of foils adjusts accordingly to these varying loads.

Similarly, as the load increases on a foil, as a result of changing moments about the mast foot, a simple foil will begin to sink into the water. In a controlled system, we need this sinking motion to result in an increase in lift on the foil, finding a new point of equilibrium.

As we are designing a single-handed craft, it would be ideal if the foil system could be self-adjusting, leaving the sailor to be concerned with the standard elements of piloting the craft; controlling sail attitude and the position of the rudder. In order generate this element of performance; we need to develop a simple and effective passive feedback system.

Instead of flaps, the entire foil would pivot to create the changes in angle of attack. Flaps, and especially partial flaps, generate a lot of drag for a given change in lift compared to just changing the angle of attack of an un-flapped foil, but requires getting the pivot point right.

Existing, state-of-the-art foil boats (such as the sailboats, Rave and Hobie Trifoiler) use devices, which follow the surface (a kind of water ski on the Trifoiler), connected by a mechanical linkage to the adjacent foil. These provide increased water drag, and are vulnerable to damage.

More information on other systems currently in use…

The constraints for the control system are;

-         Have a real time input, and be able to respond to varying flying height

-         Require a minimum amount of technology, and moving parts

There are four potential systems that could be used in conjunction with the boat.  Each of which is shown in detail below.

Option 1:  Pressure difference over a foil section to create a variable up-thrust

The use of pressure difference between foil and strut to produce foil interference, and give the foil a smaller area from which to generate lift.

Has no moving parts… was tested, but failed to answer conclusively. 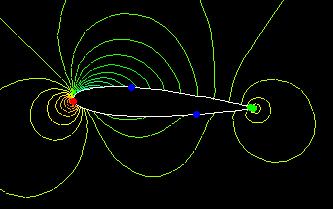 These pictures show how the pressure is at the…

The testing was carried out in two environments…

What conclusions were drawn…

To date, the most commonly used system, and that incorporated on the successful Windrider RAVE, is the ‘trailing wand’:

As can be seen from the diagram above, the trailing wand skims along the surface of the water, with its tip positioned near the leading pair of foils. Via a system of linking control rods, the varying height of the wand tip relative to the hull adjusts the angle of attack of the main lifting foils, increasing lift if the foil sinks into the water, and redusing lift, if the craft rises to close to the free surface.

The mechanical design element of the group have developed a number of control system designs, and at present believe they have a design to rival this popular method of control. The new design, being tested at the moment, incorporates no moving parts and no input from the sailor. If the novel design proves successful, it is believed that it will give the craft a massive advantage over competitor products 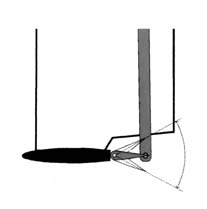 The crossbeam and tubing grid support three-inverted "T" shaped hydrofoils. The left and right foils have an automatic control arm, which adjusts the aileron flap on the back of the wing. This mechanical system controls lift and drag to keep the boat flying evenly through the water at the right depth. Bungee adjusting cords are manually controlled from the cockpit to assist and tune the automatic system. All the foils have three positions: all the way up, all the way down and half-latch. If the boat is moving the foils can be flown to the proper position either up or down.

The stock rudder foil is a neutral, following wing. As the front foils rise, the angle of incidence increases giving the rudder foil lift to raise the boat completely out of the water. When the boat is foil borne the rudder foil returns to near neutral.

The adjustable pitch rudder which I prefer has an aileron on the back of the foil just like the side foils do. You control the lift and drag by moving a control arm on the side of the cockpit. This can assist when becoming foil borne and in tuning the boat when on foil.

Option 3:  Control by an adjustable wing placed on the free surface changing the angle of attack 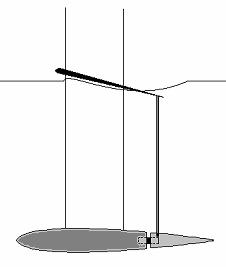 If a different material was used in the critical section the foil could change form without any input.

By using a solid rubber, that only flexed when under going serious pressure changes the foil could alter form, and hence alter the amount of up-thrust provided.